Bren2023-01-17T11:28:17+00:00January 17th, 2023|
·
Hello! We are currently casting a student short film that will take place in Dundalk and Carrickmacross in Co. Louth.
Food and travel expenses will be covered. It will be helpful if you are located nearby but not necessary.
Two antagonistic strangers find themselves trapped in a mystical room where they experience a series of visions of an alternate life, and they must put aside their differences in order to leave.
The film is called ‘Pull Back the Curtain, and will film for approximately a week between Friday 17th February and Monday 6th March. Exact dates TBC but will be between this timeframe.
We are looking to cast two people for the two lead roles:
River – Female/Lead Role – early-mid 20s
River is a reserved photographer who uses her camera to interpret the world. She stands back and observes life rather than living it. She finds it difficult to be understood by people. She is a naturally curious person but becomes easily disinterested.
Evelyn – Female/Lead Role – early-mid 20s
Evelyn is an ambitious yet dismissive person. She conceals her true emotions and is self-motivated. She keeps people at a distance due to heartache in the past. She feels alone despite being surrounded by people in her daily life. She is admired but not loved.
If you are interested, please email your showreel to: D00219099@student.dkit.ie
Here’s a link to a teaser for the writer/director’s previous short film, to get a feel for their style: https://youtu.be/LW2COVxVNzU 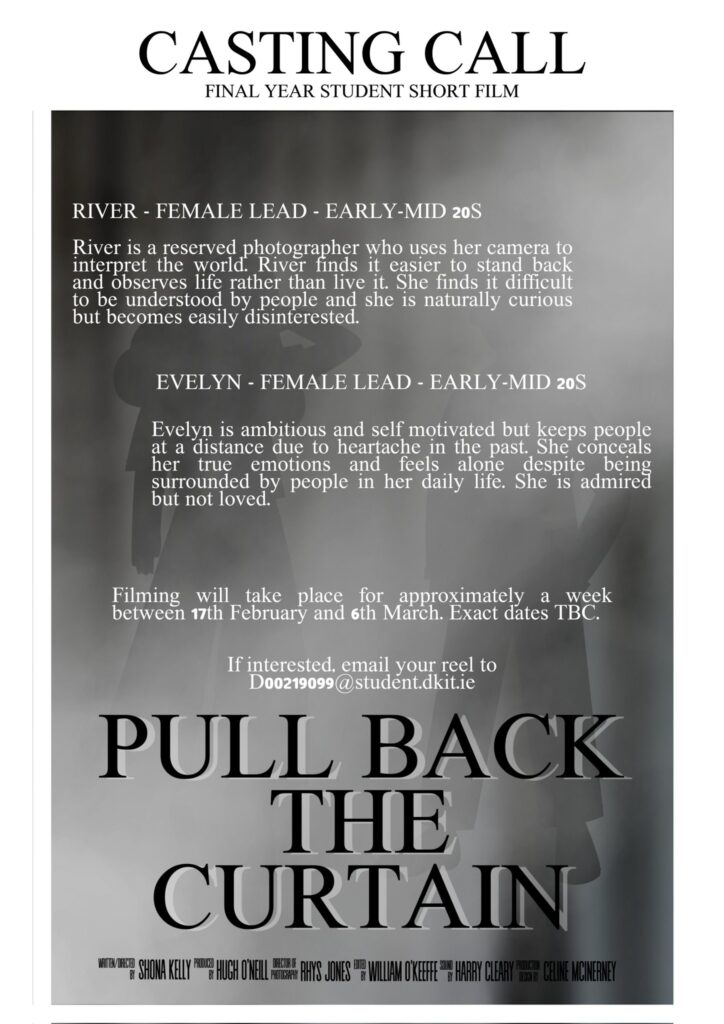 Not found
Go to Top